– the traditional art craft of the Kaluga region of Russia. The enterprise carefully preserves and develops the traditional folk embroidery of the Tarusa region – intertwining color. 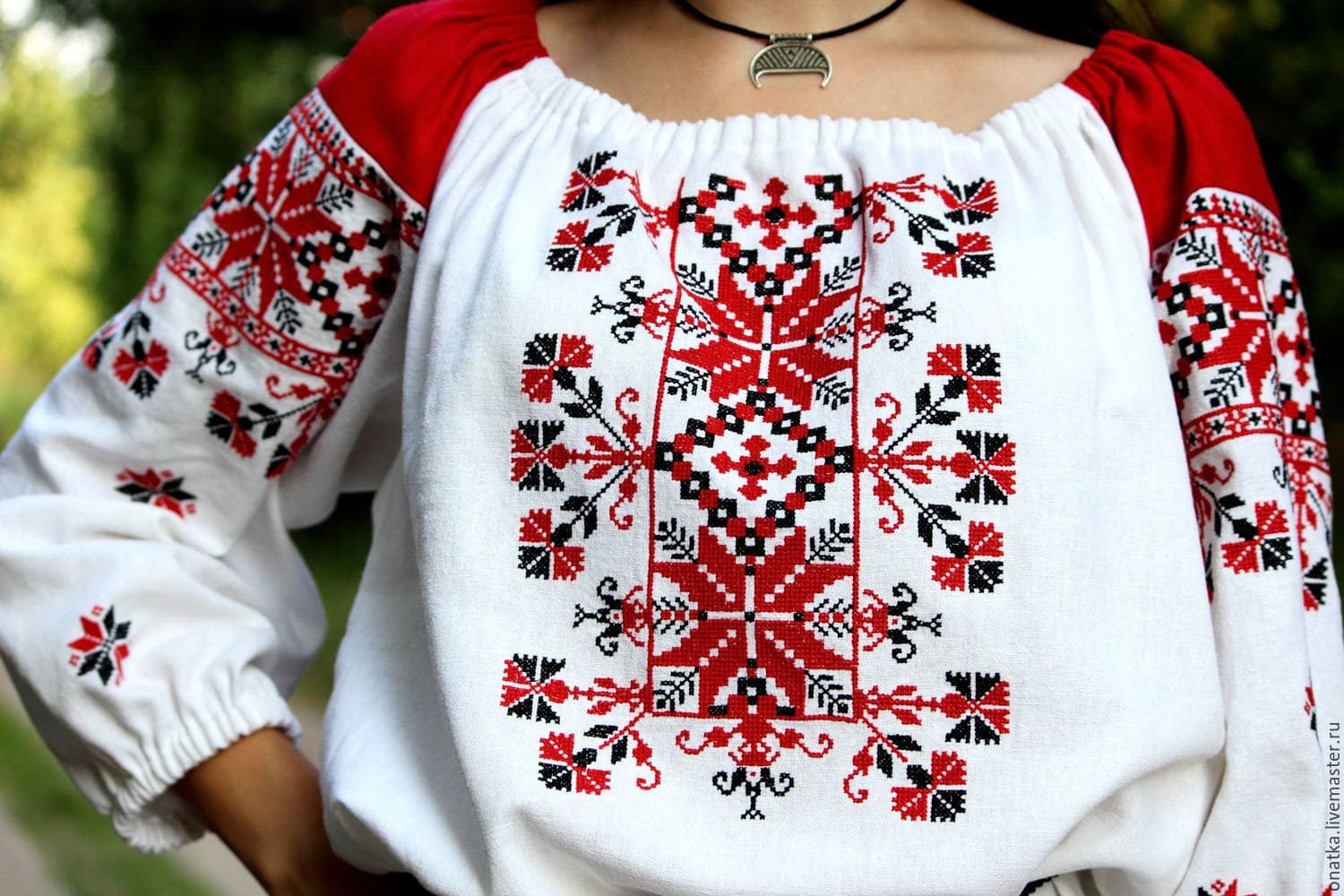 The city of Tarusa has long been famous

with its unique embroidery. It is distinguished by its brightness, expressiveness and decorativeness, folk motives carry the memory of ancient rituals and amulets, rich colors create a festive mood.

Artel of embroiderers was founded in December 1924 with the aim of strengthening and developing folk embroidery skills. The products of the field are known not only in Russia, but also far beyond its borders.

The assortment of the Tarusa embroidery factory nowadays consists of interior products, women’s and men’s clothing with embroidery, souvenirs. The creative team is constantly updating the assortment of products, highly artistic works are produced in small series, while using only natural fabrics such as linen and semi-linen. Recently, flax has become an unusually popular material due to its unique properties; the number of purchased flax products has increased significantly. Wearing linen is good for your health, as well as beautiful and prestigious.

The Tarusa factory offers everyone who cares about their health, appreciates quality and follows fashion, practical and beautiful products to create a unique style and appearance of your home. 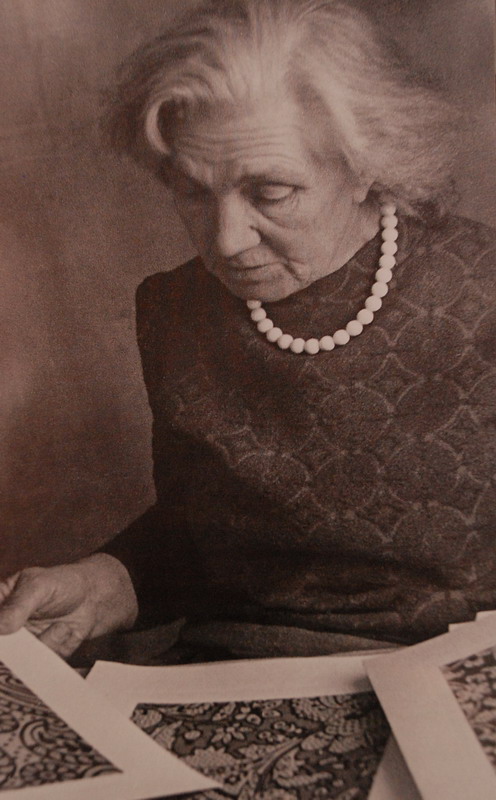 In 1923, two wonderful women settled in Tarusa - lovers and experts in folk art - Maria Fedorovna Yakunchikova (a close relative of the Polenov family) and Natalya Yakovlevna Davydova (specialist in folk arts and crafts).

Tarusa and the villages adjacent to it have been the center of folk art for a long time – Kaluga color  intertwining, in the old days such embroidery was called “cutouts”. It is called Kaluga because it was  embroidered this way in all Prioksk villages and villages around Kaluga.

Having studied Kaluga embroidery, Yakunchikova and Davydova decided to organize an embroiderers’ artel in Tarusa in order to revive the local seam and ornaments of folk embroidery. The official registration date of the artel is December 4, 1924. Somewhat earlier, in 1917, Margarita Nikolaevna Gumilevskaya came to live in Tarusa. After working as a teacher for several years, she was forced to leave students for health reasons. The need to find a new job brings her to the embroiderers’ artel. She immediately attracts attention for her hard work, perseverance, and most importantly, the ability to be creative. The search for interesting folk drawings and embroidery methods begins. A young employee gets involved in the creation of new ornaments based on folk traditions. Gumilevskaya becomes a brilliant artist. In 1928, Davydova died, Yakunchikova went abroad. The management of the artel falls on the shoulders of Gumilevskaya, later she becomes its main artist.

The first period of the artel’s work was a period of homework, the raw material for the craftswomen was a peasant canvas, colored sheaths, and only linen threads were used for embroidery. We dyed the threads ourselves. The artel employed 30-40 people. The assortment of the artel consisted of tablecloths, paths, embroidered dresses, smart-cut shirts, women’s caftans. The artel sold finished products to the Moscow export office – Mosekust. At this time (from 1924 to 1929) there was no general workshop and division of labor. In 1929, artels allocated premises for workshops, and a laboratory was created. The number of members of the artel reached 300 in 1930. There was a division of labor into workshops: a “plan- durge” workshop, where a pattern was drawn on the fabric and the threads were tugged on the canvas, making a net; an embroidery workshop – work in a hoop, a “gathering” workshop, in which already embroidered things were sewn with decorative stitches, hemmed edges were hemmed under a “tassel” hemstitch and the corners were closed. Gradually, the artel switched to other raw materials – wide fabrics and factory floss threads. Samples of patterns were brought to the artel by the peasants of the Tarusa region, in the villages they were looking for old objects (towels, tablecloths, curtains, clothes) with interesting drawings. If they manage to get an object as a gift, they bring it to the artel, if they don’t give it, then they redraw the ornament.

This is how a unique fund is created. Unfortunately, during the war, when in 1941 the Germans ruled in Tarusa for two months, part of this unique fund was lost. The work of the artel was interrupted. After the expulsion of the Germans, Gumilevskaya traveled tens of kilometers in search of villages where there were still products with original embroidery. The restoration of the artel began by the beginning of 1942, 350 people worked. They sewed clothes for the soldiers of the Soviet army, then they began to produce stitch embroidery products. In 1945 the artel became part of the Kaluga Artistic Industrial Union. In 1947, the Artel took part in the exhibition in Moscow “30 years of Soviet power”, in 1950 – at the exhibition of products of industrial cooperation, in 1951 – at the exhibition of republican folk applied art. The artel won the Gold Medal at the Brussels World Exhibition in 1958. 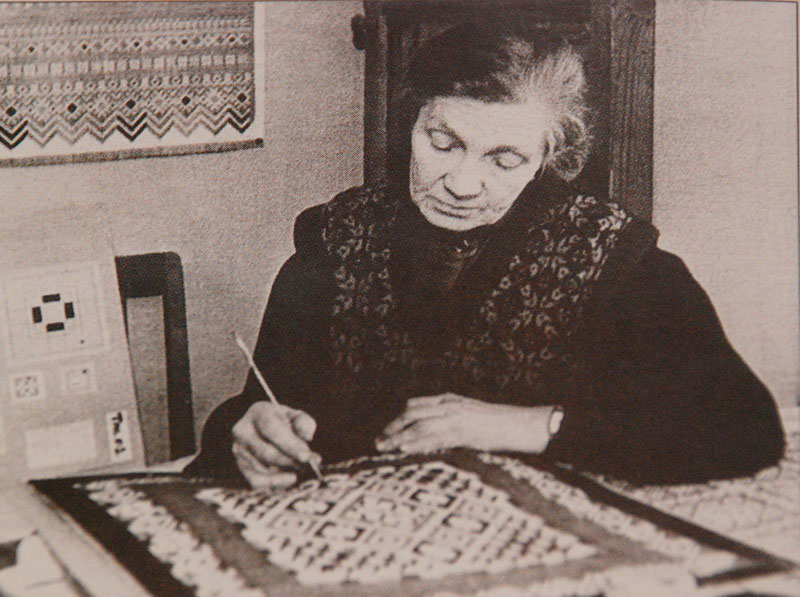 In 1953, the artel was located in three adapted buildings, but the buildings did not correspond to the normal working conditions of the artel members. The board of the artel filed a petition with the Moscow Roskhudozhpromsoyuz for the construction of a new production building. In August 1956, in connection with an article by the writer Paustovsky, the Council of Ministers of the RSFSR adopted a resolution to provide assistance to the city of Tarusa, and the Tarusa City Council of Working People’s Deputies allocated a new land plot for the construction of a new production building of the artel for 500 people.

In 1959, construction began on a new production building according to the design and estimate documentation of the Moscow Tsentrpromproekt, and in 1964 the new building was put into operation.

Subordination of the artel:

In 1952, the Tarusa Artel of Embroiderers was transferred to the Moscow Roskhudozhpromsoyuz. The basis is a resolution, an extract from the minutes No. 1 of the first meeting of authorized representatives of Roskhudozhpromsoyuz dated April 23, 1952.

In 1960, in connection with the management of industrial cooperation on the basis of the Decree of the Council of Ministers of the USSR No. 784 of July 20, 1960 and the Resolution of the Council of commercial cooperation of the Kaluga region No. 377 of September 30, 1960, the artel was transferred to the Kaluga Regional Department of Consumer Services and renamed into the Tarusa Factory artistic embroidery with the number of 370 people. Based on the order of the head of the Kaluga Regional Directorate of Public Services No. 203 dated November 30, 1964, in accordance with the order of the Kaluga Industrial Regional Executive Committee No. 577-r dated November 27, 1964, the Vysokinicheskaya Factory of Artistic Embroidery was transferred to the Tarusa Factory as a workshop. In January 1966, the factory was transferred to
the Main Directorate of folk arts and crafts and the production of souvenirs under the Ministry of Local Industry of the RSFSR in Moscow.

In 1970, the staff of the factory consisted of about 500 people – the largest enterprise in the city of  Tarusa.  On February 22, 1971, the Arts Council, created under the Main Directorate of Folk Art Crafts, for the  first time classified the products of the factory as products of folk art crafts.

Until 1992, the factory produces unique exhibition products, souvenirs, mass-produced products,  and consumer goods. Factory products are in high demand among buyers. The supplies of stitching  products are made under the Contracts to Moscow: to the Russian Souvenir shop, GUM, to the  Moscow base “Rosgalantereya”, the Republican base of souvenirs, as well as to the shops of Kaluga.

Every year the factory supplies stitching products for export according to the orders of the  Raznoexport office. In 1993 the factory was transformed into Tarusa Embroidery LLP. The factory  was privatized. 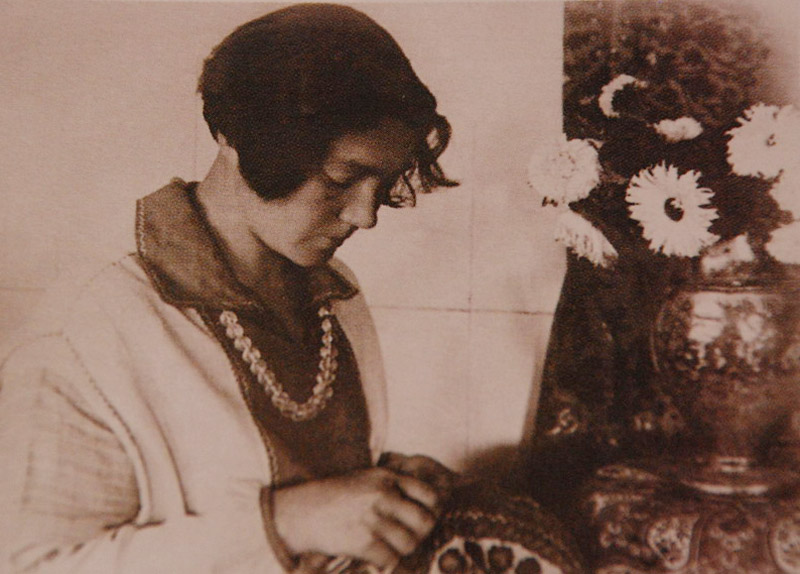 The number of employees began to decline due to difficult economic conditions and reached 100 people. In August 1999, the factory was transformed into ZAO NPP “Tarusa Embroidery Factory named after MN Gumilevskaya “. Since 1990, the factory has been going through hard times. Directors change, factory owners change. Unfortunately, in the chaos of changes, the precious fund of modern embroidery created over the years was sold. But in spite of everything, the factory is working, and its employees are doing everything not only not to lose the accumulated experience, but also to keep up with the  times. The modern Tarusa Artel of Embroiderers works fruitfully in the field of embroidery art.  The creative team preserves and develops the best traditions of folk art embroidery in the Kaluga  region. The Tarusa Factory of Artistic Embroidery is the only embroidery craft in the Kaluga Region  that has survived to this day.  The team is ready to cooperate with creative teams, trade enterprises and with everyone who is in  love with Tarusa embroidery. Today “Tarusa embroidery” is a well-known enterprise with  established traditions, vast experience in the field of folk art crafts. Bed linen sets, table linen,  fashionable clothes with embroidery – today’s Tarusa craftswomen know how to sew all this. 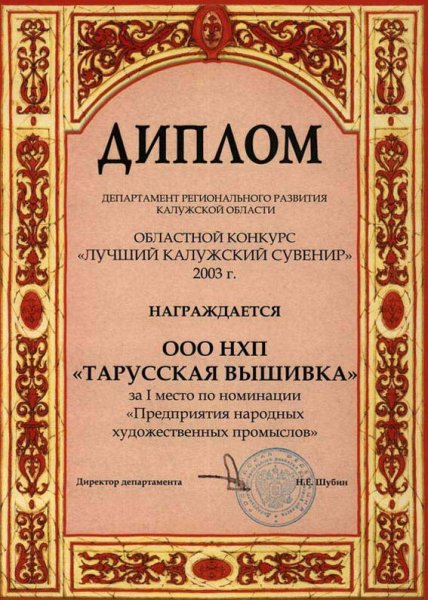 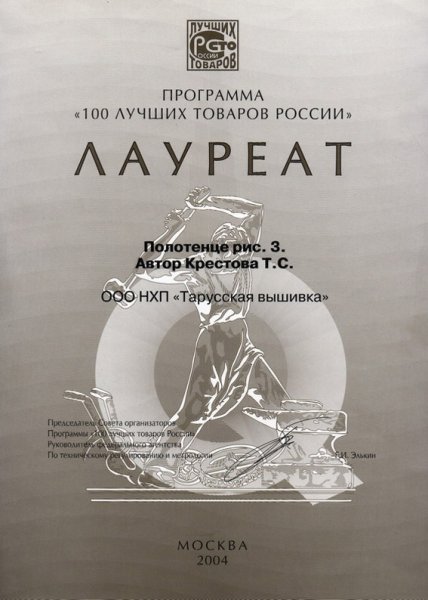 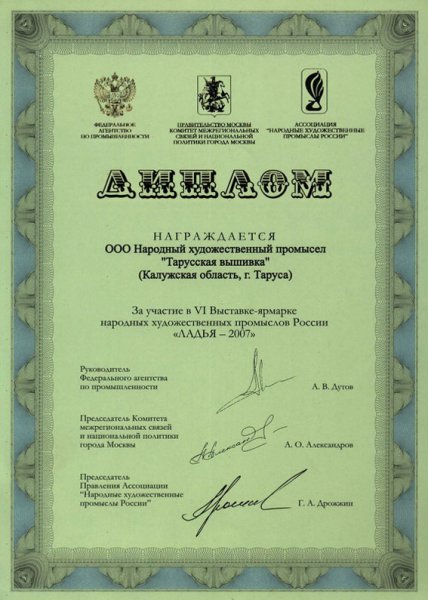 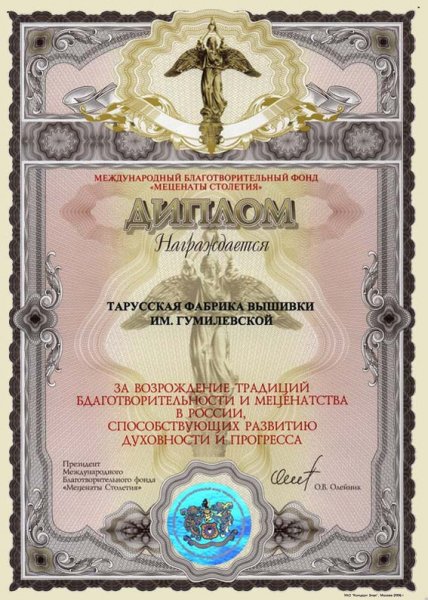 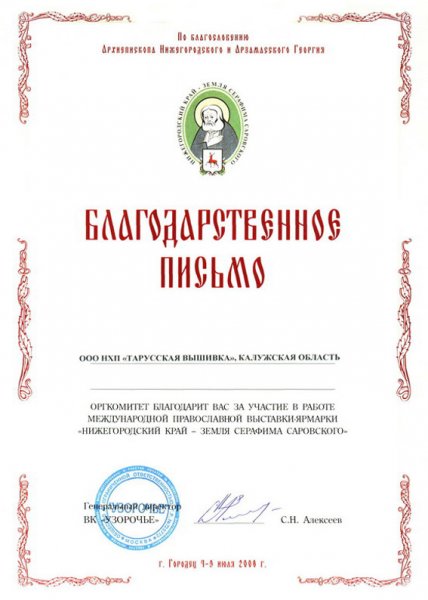 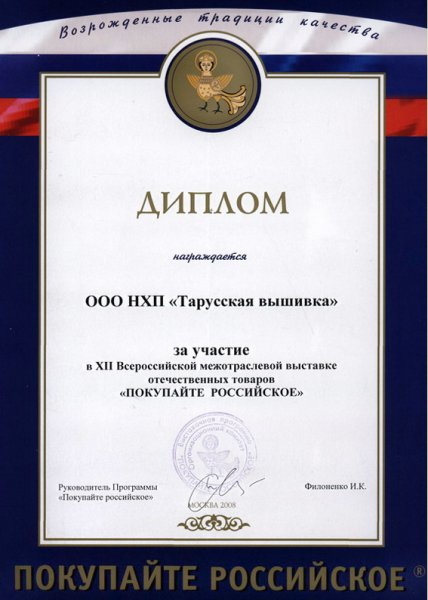 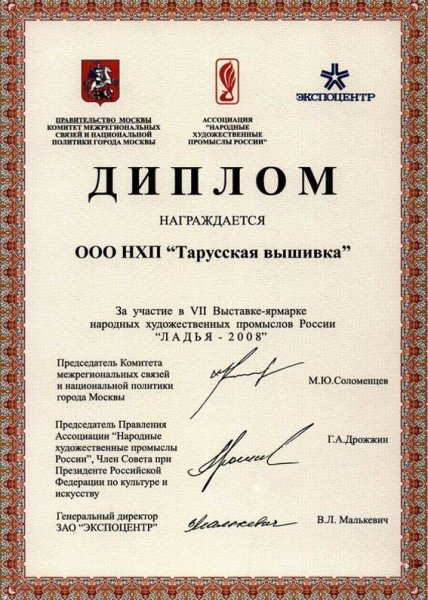